(I hadn't given my Crypt-Cities mini-setting much thought for over a year now. But somewhere during the lurid dream-quest that has been my first Elden Ring playthrough, I came across these guys. 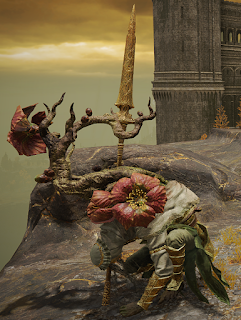 Trying not to spoil much, they are undead guardians brought back to life by the miniature trees sticking out of their backs. Some are bare or budding, others are blooming, still others are suffering a fungal infection.

How could I not go back and write something similar up for CCs?)

Ahh, here we are. Look upon this mound of rot and despair, all ye wretched Awakened.

This is the fate that awaits anyone who doesn't take the time to check their scabrous hides for sprouts at the end of the day. All that struggle, all that toil, all that Need doesn't amount to anything if you become just another mindless seedbed.

Fortunately for our demonstrational purposes, this poor wretch was taken by a less virulent strain of Rot Blossom. They're still doomed, make no mistake, but it affords us an opportunity to study it closer without fear of any of you lot succumbing- probably.

See here how the biggest growth erupts from between the shoulders- rot blossoms especially favor the spinal column as a pathway through the body when taking root. If this specimen was given the time to, it's likely it would grow into a hideously beautiful tree that would then spread its seeds all across the wastes, catching more Awakened and perpetuating the cycle.

It's almost enough to make you want to burn it, isn't it?

Of course that will only make things worse- for you, for the host, and for countless other Awakened. Instead, your best course of action will be to cut it down to size and then bury everything in pieces somewhere even more inhospitable than the rest of the wastes- a salt flat is ideal. Yes, you're damning your fellow to an eternity as an immobile salt mummy, but you'll be saving everyone else. Easy decisions do not await you in this unlife, Awakened.

See how the roots weave their way all along the body, even worming their way in under its death mask.  This allows it locomotion even after a point where the host's independent motor functions have long since ceased. The body is just another organ now, granting the plant the ability to move and see. The union is rarely perfect, and it can sometimes take seconds for stimuli to travel from one half to the other- that is what gives the rot-bedded their characteristic shamble; the thing so many of the Living characterize all of you having by default. It may be that these poor wretches originated that stereotype, but don't bear them any ill will for it if you can help it.

We may as well get this next part over with and show you lot how to neutralize them.

See how the body twitches and slowly gathers itself up as another creature approaches it. See the clumsy yet deliberate swivel as it tries to locate and react to this new threat.

See how it... waves its hand and clears its throat?

And... politely introduces itself?

It is difficult to call you "one of the lucky ones". You are an Awakened, after all. But considering the worse fate you should have suffered given the situation, it's safe to say you skirted another abyss. And look at you now; you've got a friend.

A less parasitic kind of rot blossom has taken root in your body. In fact, its relationship to you verges on symbiotic. You grant it life through your unfathomable biology, and in return it offers up its grim bounty. Perhaps it is a long-lost strain, or a more recent mutation. It may resemble a small flowerbed, a half-dead shrub, a tangle of vines, or even a gnarled sapling. Coloration ranges from matte and bland to eye-wateringly bright and lurid; texture from glassy smoothness to shredding thorns.

You resemble a Holt-Dweller whose mask has gone horribly awry, and among the unlearned you may even pass as one. But any Awakened worth heir smoke knows what you are, and will probably scorn you as such.

The plant will cause irreparable damage to your body if you try to remove it in its entirety, but you can prune it or keep it trimmed. Virtually every blossom bed that manages to keep the company of other Awakened will obsessively dispose of any fruit, seed pods, spore clusters, etc. before they can mature. Of course then you are left with company that is afraid of neither infestation nor immolation- a mad bunch indeed.

As alluded to, you can also use the 'bounty' of this bleak passenger to your own advantage. Branches can be cut and shaped into tools. Leaves can be harvested for their chemical properties. A seed can be used to hold yourself and anyone else in range of you hostage in a high-stakes situation. Your options are limited only by your imagination and recklessness.

You also benefit from something else. Something... disquieting to think about. You don't feel the Need quite as strongly as your fellows. The agonizing geas to throw yourself into a cozy little coffin in a crypt-city somewhere certainly still exists, but it doesn't have quite the same edge that drives others mad. This allows you to willingly travel farther afield of your final destination, opening up more opportunities to find resources and dangers out on the wastes.

But why exactly is the Need weaker in you?

Is it the rot blossom? Does it shield you from it?

Or is it feeding you a conflicting urge so subtle that you can't even perceive it?

And if so, where would it lead you?

Posted by The Furtive Goblin at 6:39 AM