Oh, don't give me that look. I'm not griping. It isn't like my experience ever ripened into wisdom.

In fact, I envy you. The memory of what we've lost can be as bad as any lurker out there... well, almost as bad.

But that's enough reminiscing for this old girl.

Your spotlight's fixed. Broken filaments. Didn't get damaged or nothing- just shoddy workmanship that needed replacing. You got this from Amit's workshop, didn't you? He's about as brainless as nephews come, bless his shadow.

Caravan's heading out to the settlement outside of Oldglow in a few hours, isn't it? Good luck out there. I've been hearing rumors about breaks in the light fences along the road.

Keep your high beams trained on the flanks."

The world had seen better days. Nuclear war was waged once, then narrowly avoided three more times. The global climate tap-danced back and forth over the point of no return for over a century. Milk-Eye made the jump from livestock to people and infected hundreds of thousands before a vaccine was created. Competitive flagpole sitting managed to become a fad. Again. Times were dark.

But the world slowly stood back up onto its feet.

Cities rebuilt themselves, carefully and deliberately. Politicians toned down their rhetoric enough to shake hands on armistices. Wind and solar farms sprouted up like glittering forests across countrysides, at least once enough people had bitten the bullet long enough to entice investors. Humans didn't all of a sudden realize that harmony was a sustainable way forward, but their track record began to suggest that upward turn.

Majestic, crystalline buildings rose up high, not to scrape the sky but to kiss it, as they stood cloaked in vertical farms and hanging gardens, their faces aglow with solar panels. Geodesic domes, perhaps a bit overused, bubbled up everywhere as people realized that now was their age. Elegant and garish art styles exploded onto streets everywhere as an era of blending cultures and philosophies reached its climax.

Nobody wanted to say it. Nobody wanted to jinx it. It looked and felt like a golden age. A brilliant dawn that mankind was waking up to, their minds still stuck halfway between dream and the boundless possibilities of a new day.

In the end, that caution saved a lot of people their disappointment.

It didn't save very many of them their lives, though.

One day, the world woke up to find that the sun had shrunk. It wasn't by much. Just enough to get experts scratching their heads and double-checking their instruments. But every hour after that point, the giver of life whom people had only recently reacquainted themselves with grew smaller and dimmer, as if it was getting further away. By the end of the first week it was barely an orange dot above the equator of a panicking world.

They theorized that something might have happened to profoundly disturb the planet's orbit around its star, but that didn't explain why all of the other stars were wrong.

As the sun grew smaller and the nights became more intensely dark than they had been for hundreds of years of human light pollution, the stars began to shift and twist out of their formations. Constellations rearranged themselves or broke apart entirely. New stars appeared nightly, while old ones winked out at random, as if the night sky were mocking anyone who tried to understand what was happening to the universe around them. Satellites vanished or were destroyed in erratic, decaying orbits. Space stations went dark.

No one knows what happened to the astronauts on board. Hopefully they only died.

The fear that gripped the world was that this was an end to civilization as they knew it. That within a few weeks--months, at best--every ecosystem on the planet would collapse, and the food supply would go along with it. Humanity would face a cold, lonely death by starvation in the darkness. They barely noticed when the last, vague suggestion of their beloved sun vanished into the gulfs of the night sky.

The deepening dark had grown and matured. It grew arms and claws to grab living things that strayed from the light, and teeth with which to gnaw them. Entire cities which had barely started withering were emptied out with little more than muffled cries and whimpers. The wilderness became anathema to life, and what still stalked those places could no longer be considered truly alive. One's own shadow became a deadly thing, to be scrutinized and guarded against, lest something unearthly rise up out of it to scrape at the light. The death toll will never be known, let alone imagined.

Those who remained learned to stick to the light. Everything that could be burned as fuel, was. They scavenged what they could in the inky skeletons of their homes, and then moved elsewhere to start all over again. Some groups cobbled together primitive generators to stay put with. A few even tried to farm in the flickering light of grow lamps. In a few years the norm of life switched from creativity and cooperation to fighting over scraps until it came one's time to get swallowed up by the night.

That is, until some damned, lucky fool discovered pallite.

Unoriginally named for the pallid yellow light it casts in any solid, liquid, or gaseous state, pallite has allowed humanity to pretend that there is still a chance.

No one has a satisfying explanation of where pallite comes from, or how it was only discovered on the cusp of the endless dark. All that is known for sure is that it comes from below. It wells up in pools or accumulates in waxy, crumbly deposits. Sometimes it even discharges from vents in the ground into clouds of tangible light, but for whatever reason that form is rarer. Each nucleus of the new "element", for lack of a much better word, has a half-life that appears to adjust according to how much other pallite surrounds it. It produces almost no heat on its own, but it can power one hell of a combustion engine with a little pressure and abuse. It is the closest thing to a miracle fuel that this dying world can hope for.

It's also highly carcinogenic in all forms, raw or refined, and smells like kerosene and durian fruit had a baby, and then that baby soiled its diaper. Even mild exposure from a lifetime of use greatly increases risks of cancer and other diseases. Miners and siphoners rarely grow old enough to retire. The stench also clings to a person, and can damage senses of smell and taste over the years. But it's what keeps the darkness at bay, so people endure it.

Pallite lamps line the walls, floors, and ceilings of every livable space in the world today, and the extraction of more is one of the largest, most grueling industries in existence. When people dare to step outside of their homes or travel to other holdouts, they do so under the lurid glow of pallite lamps, both placed along roads and mounted on vehicles. It's what allows trade and communication to persist, and any harm is causes is worth it to make the world feel a little smaller and safer.

It takes a lot of training to master the use of pallite and maintenance of anything that runs on it. It also helps to be versed in fighting off the darkness when a malfunction does occur- and it will.

Here enter the Lamplighters. Every camp worth its light has at least one or two of them hanging around, making sure the whole place doesn't go to hell. Equal parts engineer, guide, and mercenary, these people come from any walk of life touched by the tendrils of ennui and dissatisfaction- which is to say, all of them.

Most of them apprentice under another lamplighter, but a few of the larger towns and proto-cities dotting the landscape sport their own schools. In either case, they are drilled relentlessly to understand the ins, outs, and applications of pallite technology, while also picking up experience in a range of skills including things as far-flung as hand-to-hand combat, botany, glassblowing, team-building, and autohypnosis.

They brave the dark in between lights, keeping fences functional and settlements livable. They keep the lamp-wagons working in every caravan. They rig pallite flamethrowers to smoke anything that creeps in from the darkness. They turn to conventional weapons if flesh-and-blood bandits decide to decline diplomacy. They know when a caravan is doomed, and how to overload a pallite bomb to take everyone out mostly painlessly before the dark comes.

They are known by the smell of pallite, and the fractal-shaped scars left by shadow-wounds.

They are the closest thing to heroes this benighted world has. 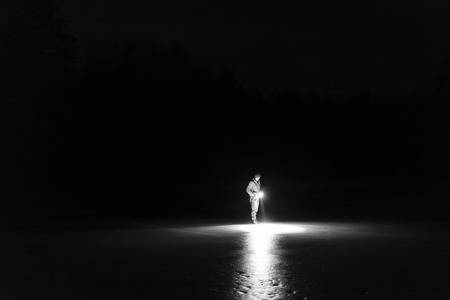 Posted by The Furtive Goblin at 11:58 AM

Email ThisBlogThis!Share to TwitterShare to FacebookShare to Pinterest
Labels: Lamplighters