Living & Adventuring in the Earthen Vaults

Click here for the rest of the Children of Blood & Stone material.

The Children of Earth and Stone live in a dozen or so air-filled, cavernous vaults deep below the surface. These vaults lie on top of fault lines connecting to the Elemental Plane of Earth. How close a vault lies to the plane varies, with deeper vaults having a far more primordial nature than those relatively closer to the surface. Some undiscovered vaults are said to lie on the other side of the rifts, their denizens strange, time-lost, and far more elemental than mortal.
Tribal myths disagree on whether the vaults already existed when the Children were spawned, or if their divine creators sculpted the caves specifically to house them. This question is of little importance in day-to-day life, because the Stonebloods know for a fact that they are integral to the continued existence of their beloved homes.
Each vault contains an ecosystem of plants, animals, fungi, and small numbers of elemental creatures. These ecosystems are delicately balanced with hardly any energy or resources for the cycle of life to spare, so the Stonebloods take sustainability gravely seriously.
The Children do not consider themselves wardens of their vaults, however. Their place in the world is no lower or higher than that of other animals, and they are dearly aware of how sensitive they are to the effects of systemic collapse.
A typical vault is several dozen miles across, and several hundred feet high. It contains anywhere from one to a half- dozen tribes, each varying in size from smallish to only a single extended family. The vault normally has the resources needed to support the existing population.
Many vaults have a ceiling of dimly glowing crystals that provide a level of illumination similar to twilight or moonlight. This light is constant, with no analogous day/night cycle like surface-dwellers are used to having. Time is better told using simple timekeeping devices, or the tide and flow of a vault’s subterranean lakes and rivers.
All known vaults are connected to one another by a network of tunnels known as the Veins. Trade and travel between the Stonebloods, in however small a capacity it exists, is completely dependent upon these tunnels. They are also the most permeable sites to incursion from the World Beyond, making them a vital yet dangerous place in Stoneblood culture.

The vault of Shale Moot lies at the center of a small web of Veins somewhere beneath southern Earthroot in eastern Faerûn. It is so-named for the prominence that dominates much of the vault’s center, and the tribal assembly building which stands atop it. It is an otherwise typical Stoneblood vault.
Points of interest in Shale Moot include...
Makha’s Hearth. The largest settlement in Shale Moot. It is home to a temple dedicated to Luthic and Grumbar, as well as one of the only metalworking forges in the vault.
Luthic’s Bosom. A small quarry where precious stones and ores are carefully hewn out in accordance with religious law. Most quartz in the vault originates here.
Brightforest. A forest of giant, bioluminescent mushrooms where much of the tribes' food and 'wood' are grown. Dead Stoneblood orcs are ‘given back to the earth’ and buried here as fertilizer.
Hurosh’s Dens. A population of dire bears lives in the caves along one face of the vault. They and the Children mostly leave one another alone, but shamans and rangers are known to take their cubs as animal companions.
The Moot. The eponymous meeting place is an island carved out of the center of an old riverbed. The moot serves as a court for disputes between tribes and constituent clans, as well as a triennial gathering of all tribes from adjacent vaults known as the Cairn. The isle is presided over by an elder shaman and her clanless disciples, who act as a neutral third party in all events.
Mudbubble. Geothermal hot springs make this place a cross between a sacred house of healing and a public bath. Most non-Stonebloods find the water too hot and rich in minerals to enjoy.
Gnashing Teeth. The low, damp ceiling here has created a vast field of staggered stalactites and stalactites resembling rows of long teeth.
The Gyre. A large, circular pit occupying one corner of the vault. It descends an unknown depth into the darkness, and all are forbidden to approach it. Sacrifices of quartz and bear meat are made to quiet the rumbling that rises up out of its depths every few years, just in case.
Woeful Cairn. The site of an old battle between tribes that resulted in a near-total massacre of all combatants, as well as the subsequent establishment of Shale Moot to prevent future tragedies.

Contact with the outside world was, for many generations, considered at once unthinkable and impossible. Yet in recent months that belief was tested and found wanting. The Shining Ones, so named for their debilitating dependence upon torches and other bright lights, have finally plumbed the Underdark deep enough to stumble upon the Stonebloods completely by accident while hunting for an Illithid thrall cell.
These Shining Ones, or “adventurers” as they call themselves, brought flesh to the ancient rumors of an upper world. It threw the tribes into a disarray that they are scarcely recovering from now, and it has thrown open the yawning and uncertain doors of possibility for the Children.
Some are interested in venturing beyond their ancestral vaults in search of the world that had been denied to their kind for so many generations. The possibility of new land is also immensely tempting. While conquest is not high on any Stoneblood’s list of priorities, the idea of taking some of the pressure off of their home vault is highly desirable. The idea of meeting new peoples, new cultures, and truly understanding the world they live at the heart of is an equally seductive thought to many youths.
Other Stonebloods instead choose to recoil from the world at large. They believe that they had been sequestered for a good reason, and that contacting the outside world is in defiance of the gods, as well as their better nature. Their attitude mirrors the clannish hostility of near-surface Luthic worshipers, emphasizing xenophobic defensiveness that appeals to many staunch traditionalists.
Most others are somewhere in the middle, or are entirely apathetic to the discovery or the idea of being discovered: they will endure whatever ephemeral changes have been wrought, just as they always have.
But even in the coziest vaults, among the staunchest homebodies, there have been found sprouts of that most hated and prolific weed: adventure.

20 Adventures in the Vaults

1. A strange new disease is ravaging a vault’s rothé herds. The tribes—and the whole ecosystem—may collapse.
2. The crystals lighting the vault’s ceiling are winking out one by one, plunging it into darkness.
3. A breathless messenger stumbles out of the Veins saying their tribe has been attacked by slavers.
4. Two clans threaten to go to war over the deaths of a pair of youths, each blaming the other and demanding justice.
5. The vault’s river ran dry for several days. Now the water is flowing again, but it is befouled and poisonous.
6. One of the Veins collapsed in a recent earthquake. The neighboring vault is stranded, and monsters now infest the tunnels.
7. A Stoneblood adventurer lost their ancestral quartz amulet in the Underdark, and face shame back home if they don’t find it.
8. A Stoneblood shaman had a vision of an imminent natural disaster and claims the only way to avert it is to appease the spirits of the Elemental Plane of Earth.
9. A group of Shining Ones formerly under a chief’s protection has been imprisoned and accused of corrupting the youth with tales of the World Beyond.
10. The vault’s sacred quartz mine was defaced and ransacked, its keepers murdered.
11. Near-surface orcs have made contact with a vault. The Stonebloods hope diplomacy has a chance.
12. A clandestine Gruumsh-worshiping cult has started to gain influence over a tribe’s warriors.
13. A community of Svirfneblin desperately need a type of ore that can only be found in a nearby vault.
14. Enterprising traders from the Veins wish to acquire rare and exotic surface goods for the vaults.
15. A newborn Stoneblood is rumored to have come out of the womb already covered in thick lithoderms- a startling omen in need of answers.
16. Some curse or sickness has rendered a vault’s venerated cave bears mindlessly aggressive.
17. Travelers have found a vault completely abandoned and empty, with no sign of the local tribes.
18. An ambitious and charismatic young chieftain believes the
Stonebloods must face the world as a people united... under a single ruler.
19. Swarms of starving xorns were pushed out of their habitat, and are tearing the vault apart for food.
20. The tribe moot draws near, and preparations for the proceedings must be made. 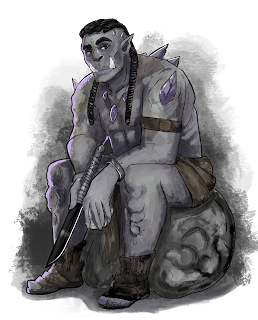 Posted by The Furtive Goblin at 3:44 PM