Carving Mouths with which to Scream.

The forested hills that the Esgodarrans now call home boast considerable farmland, dug into the slopes and concealed by the trees. These terraced gardens favor smaller numbers of nutrient-rich crops quite unlike the vast fields of grains from the plains dominated by modern Ersuunians. Among these staple crops are included a variety of gourd vegetables in diverse colors and shapes. Just as diverse are the customs and cultural traditions surrounding many of them.

Some gourds are grown solely for the purpose of housing medicines or sacred substances for the holy folk of the hill people. Others are used as food, or animal fodder, or their rinds are ground up for several purposes. One type of spotted vine fruit is even known as a source of a potent intoxicant, when fermented properly. All of these uses and more are ingrained in Esgodarran tribal memory by a wealth of stories and songs.

One story in particular is told and retold every harvest season, to explain why so many of the hill tribes hollow out different gourds, carve their sides into elaborate shapes, and then plant them around the tops of specially prepared torches as part of seasonal celebrations.

Once, long ago, the Esgodarrans were fighting a losing war against the encroaching Haraalians. Before the chariots and the saddled archers of the horsemen, they fell like so much scythed wheat. As they retreated into the hills where they eventually built their holdfasts and villages, they brought the bodies of their dead with them.

When the first crops were planted in soil ill-suited for farming, pragmatism led to a creative, albeit somewhat grim, use for those bodies. The dead became fertilizer, so that their families could live to see the coming year. And their sacrifice was not in vain: the legend claims that the hills bloomed with produce, chief among them being swollen gourds of proportions that any farmer then and now would be envious of.

But when the harvest season drew close, the Esgodarrans sensed that something was wrong. The gourds seemed to be disturbed ever so slightly when looked over every morning, and at night strange sounds could be heard coming from the gardens. These happenings continued and intensified over the following weeks until the hills were weighed down upon by a terrible pall- the people were sure that a curse had settled upon them like clinging spider's silk.

Eventually, the source of the omens was discovered. It was the gourds themselves, writhing and moaning upon their vines as if they were alive. When terrified tribespeople dared to stalk closer, they found that they could recognize the pained, muffled sounds as human- even as the voices belonging to their deceased loved ones. Terror gripped one and all as they realized that in growing their food from the corpses of their kin, they had unwittingly trapped their souls.

A wise and skilled woodsman proved to be their salvation, as he stepped forward brandishing his biggest and sharpest knife. One by one, he cut the gourds from their vines and then cut into their sides, carving faces into their hard outer layers and allowing their soft insides to spill forth. Blessed with eyes that could weep and mouths that could scream, the gourds wailed their horrors out. They had been reliving the moments of their deaths over and over again while trapped in the blind silence of the earth, and only through the woodsman's cuts were they able to rid themselves of the accumulated pain.

Days passed as the hillsides screamed and lamented, the sound of which drove even the most stalwart of god-king Haraal's soldiers away from the hills in fear. The Esgodarrans stuffed their ears with tree cotton dipped in beeswax to block out the worst of the wailing, but it grated terribly at even those steady folk before the end.

One by one, the gourds expelled their anguish and gave up their ghosts. The nightmare ended at last when the final gourd's voice quieted to a pulpy sputter, in which it thanked the woodsman and their tribe for the mercy. It bequeathed the banquet of their bodies to the people of the hills, but warned them that never again could anyone be buried beneath a garden. With that, the last trapped Esgodarran soul sloughed out and moved on to the afterlife.

Ever since that day, the use of human fertilizer has been strictly forbidden among all of the Esgodarran tribes. As a reminder of that grave mistake, the people carve more mundane fruits into contorted faces or depictions of other mythological scenes every year, and place them on display for all to see.

A popular trick aimed at children or very wayward lowlanders is to throw one's voice so that it sounds as if a gourd is speaking--or screaming--at the observer. 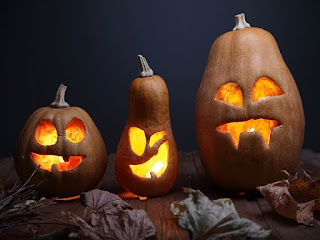 Posted by The Furtive Goblin at 5:33 PM